Hello to everyone from our community

It has been a while since we have posted and summarised the events of the community and a couple of stuff has happened already in the early months of the year.

Administrative
Activity
The activity in the community and in the game is stable. We have enough players to participate in tournaments and in mixteams. Sadly, our public servers are not yet very appealing to our community, but that is likely to be due to the attraction of the mixteams that we have. Our forum has enough members online daily to maintain a good atmosphere for the community and the amount of posts is over one thousand already. From my part I can say that it is a pleasure to work in this forum and community so far. I am really thankful to the community for leading the discussions according to a right way as I would call it. I would wish to see some replies in the topics from members who are less engaging. There is so many interesting users here who could contribute just a little bit and it would make a huge difference.

Most activity comes from European players, however, our goal is to support the players particularly in South and North America to build a solid playerbase. Therefor we would need gaming servers either in North America or in South America. So far, we believe it would be easier to build a South American playerbase. We will be thinking of how to increase activity in these regions. Players from these regions are welcome in this forum and welcome to give us suggestions and thoughts. There is also discussions going on in this forum about that particular subject, where everyone can take part.

New Community and Name
We have held a discussion in the forum about the relation to previous cs2d communities and linked to that we talked about having a new name for our community. The discussion lead the the summary that the player see the organisation on www.cs2d.tk (CS2D.TK) as something kind of new and less related to previous communities. A new name however could not yet be found as the administration needs more time to reflect on that and we stick to cs2d.tk until further notice.

Linked to this, our ideas about having a twitch.tv overlay, a new logo and possibly a new website will be a matter of issue, once the name changing project has been finished.

Planned Tournaments
We are currently proceeding with 2 tournaments. The SSC 2020 - Spring has 16 registered players and the Accomplice League 2020 has 10 registered teams. There occured some inactivity from some teams, which we regret, but we cannot do much about it. It is partly due to lack of motivation of the teams and partly because we do no longer have servers from America. However, if the rest of the teams and players play their matches as supposed, activity will not be an issue since there is many other teams left in the run.

In summer we may have two or three 1on1 tournaments going on. One will be the SSC 2020 - Summer according to our known SSC format. Another major 1on1 tournament with group stages may happen, following the traces of the former prestigious WCL tournaments, but it will only happen if there are 32 players to register, which is a high demand. Then we would like to announce a new cup called "Starter Cup 2020". This cup will be promoted on www.unrealsoftware.de in one topic and it's goal is to attract new players who have no or very few ties to our community. We want them to play 1on1s without many restrictions in terms of rules. They will not need to upload MOSS reports for example. The goal is to get new players to know our community.

A team or clan tournament is something we are ambitious about and we will try to realise it, however, it is unclear so far wether we have the capacity and time for it. In any case, we call all players to mobilise their clanmates somewhere around summer and if there are enough clans (preferably five or more) we could do a nice tournament under given conditions. If you have other ideas about tournaments, let us know, we have an open ear for everyone.

Sl!m for their rankings. The first edition was a success and we hope to continue it in the Spring.

The Accomplice League 2020 has just entered the second month and it is hard to judge who will make it to the top at the end. 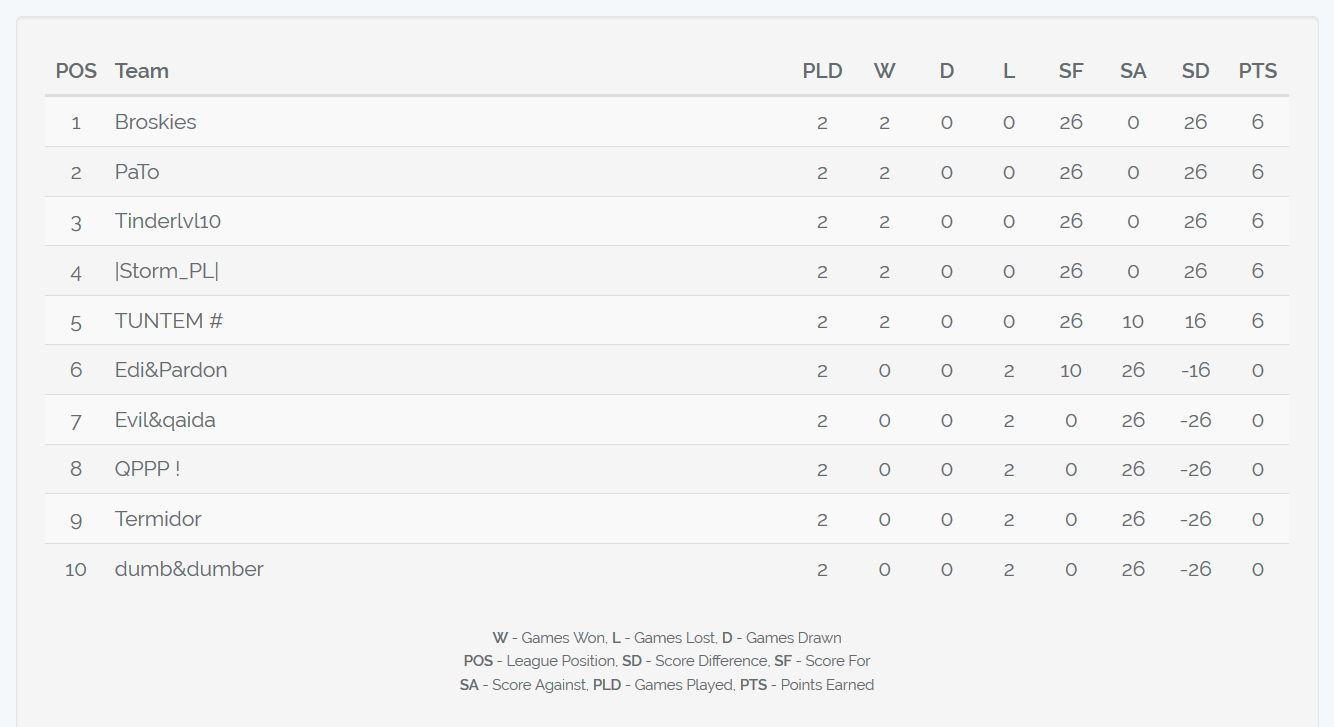 Milriko was able to get #1 both in January and February, while

Pardon reached rank #3 two times. Is Milriko's winning streak going to continue in March? The current Mixteam Championship has become more competitive from what we can see in the first days of March. Good luck to all players!

Staff and Support
We are once again reminding the community that we lack of members in our Staff and Support team. We need people who are eager to either host tournaments or to work on news/media tasks with us. It is not easy to do all the work by ourselves and we would appreciate a little bit of help coming from the community. Especially for the Support team, you would be given less time-consuming tasks to do. Please let us know via PM if you want to help us!

Our current team can be found here: forum/memberlist.php?mode=team

Share your thoughts with us below in the comments. See you in the servers!
Top

I’m excited for how that starters cup is gonna turn out. I think the chinese community did something similar. Hasn’t that chinese community owner contacted you quite a while ago because he wanted a partnership?

Nice to see there is still things going on. I admire your guys passion for the game and the community.
Really nice job with the news and overall, keep it up.
|Kc| k 0 z >SWE<
:[ Wings ]: k 0 z
Top

Hey k0z thanks for your feedback, it's really cool to see you around here. One of the few Swedish players who has some ties to the game.

Yeah SmD I think this guy's name was hezhi996. I didn't see him anymore. I only realise the Chinese servers have many players around at some time of the day, like 30 guys in public. Skillwise there is a large gap to our competitive scene though. And the distance to China doesn't allow us to have good matches together I think.

I hope the Starter Cup can get at least 8 players registered.
Top

SmD wrote: ↑Tue Mar 10, 2020 5:46 am Hasn’t that chinese community owner contacted you quite a while ago because he wanted a partnership?

Yup but he disappeared without a good reason, mabye it was a waste of time anyway.
Just here to increase shitposting counter and make presence